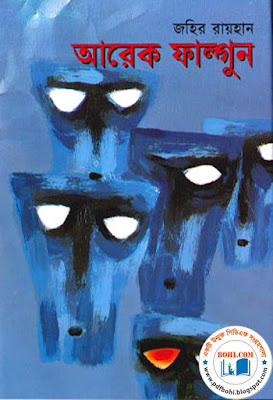 Arek Falgun is  a novel Written by Zahir Raihan. Zahir Raihan was born on 19 August 1935, as Mohammad Zahirullah, in the village Majupur, now in Feni District, Bangladesh. After the Partition of Bengal in 1947, he, along with his parents, returned to his village from Calcutta. He obtained Bachelor of Arts (Honours) in Bengali from Dhaka University. He had been married twice, to Sumita Devi in 1961 and Shuchonda in 1968, both of whom were film actresses. Zahir Raihan received his post graduate degree in Bengali Literature. Along with literature works Raihan started working as a journalist when he joined Juger Alo in 1950..Later he also worked in newspapers, namely Khapchhara, Jantrik, and Cinema. He also worked as the editor of Probaho in 1956. His first collection of short stories, titled Suryagrahan, was published in 1955. He worked as an assistant in the film Jago Huya Sabera in 1957. This was his first foot print in film. He also assisted Salahuddin in the film Je Nodi Morupothay. The filmmaker Ehtesham also took him for his movie A Desh Tomar Amar, for which he wrote the title song. In 1960 he arrived as a director with his film Kokhono Asheni. In 1964, he made Pakistan's first colour movie, Sangam, and completed his first CinemaScope movie, Bahana, the following year. He was an active worker of the Language Movement of 1952 and was present at the historical meeting of Amtala on 21 February 1952. The effect of language movement was so high on him that he made his legendary film "Jibon Theke Neya" based on it. He also took part in the "Gano Obhyuthyan" in 1969. In 1971 he joined in the Liberation War of Bangladesh and created documentary films on this great event.During the war of liberation Raihan went to Kolkata where his film "Jibon Theke Neya" were shown. His film was highly acclaimed by Satyajit Ray, Mrinal Sen, Tapan Sinha and Ritwik Ghatak. Though he had his financial problem going on that time, he gave all his money to the Freedom Fighters trust that he got from the show. Raihan disappeared on 30 January 1972 trying to locate his brother, the famous writer Shahidullah Kaiser, who was captured and killed by the Pakistan army and/or local collaborators during the final days of the liberation war.It is believed that he was killed with many others when armed Bihari collaborators and soldiers of Pakistan Army in hiding fired on them when they went to Mirpur, a suburb of the capital city of Dhaka that was one of few strongholds for Pakistani/Bihari collaborators at that time. His popular books are Sesh Bikeler Meye,Trishna,Hajar Bochhor Dhore,Arek Falgun,Borof Gola Nodi,Ar Koto Din,Koekti Mrittu,Ekushey February, Sonar horin,Somoyer proyojone,Ekti jiggasa,Harano boloy,Badh,Surjagrohon,Noya potton, Mohamrittu, Vangachora, Oporadh,Shikriti,Oti porichito,Ichha onichha,Jonmantor,Poster,Ichhar agune jolchhi,Kotogulo kukurer artonad,Koekti songlap,Demag,Massacre,Ekusher golpo.

Download free Bangla Books, Bangla Magazine, Bangla translated books, Bangla Golpo, Madrasah Books, School Books, Adventure Book, Computer Books, Mp3 Books,  Anubad in pdf format or Read online. All links are external and sometimes may not work properly. If you face any problem in downloading please let us know in comment box. We will update the link as soon as possible. For sending new book request or for publishing your own book in this site please write on comment box. Please let us know immediately if you found spam, adult content or copyright violation.

Download Link
Userscloud ।। Userupload ।। Mediafire ।। Googledrive
In this site, some link or book is not published by the author. So if any one claims about any content or book for copyright we will remove the link within 24 hours. By read or download any content or books you must agree the privacy and policy of the website. For any kinds of query write in comment box. Please send new book request and give your suggestion.